About the S&P Tallet

Today the Western Sephardic tradition, often referred to as S&P for Spanish and Portuguese, can be found at a number active congregations scattered around the world in London, Paris, Amsterdam, Jerusalem, New York and Philadelphia. The referred to the prayer shawl not at a "tallit" (ta-leet) as in modern Hebrew, but as a "tallet."

The S&P wore a wide tallet, usually made of silk with pale blue stripes, draping it over the shoulders and upper arms as a shawl (as opposed to a cape), with all four tsitsit hanging in front. The blessing said upon donning the tallit says, "lehitatef b'tsitsit," to wrap oneself in tzitsit. Proponents of wearing a tallit as a cape note that one is "surrounded by the fringes" (i.e. with two in front and two behind), whereas when a tallet is worn as a shawl the wearer is wrapped in the tallet itself, which is a far more literal interpretation of the wording used in the blessing!

The tsitsit are tied in the traditional pan-Sephardi way (with a knot at each wind of the outer string, whereas the Ashkenazi custom is to wind continuously). However, they use the older configuration of 10-5-6-5 winds, rather than the later-developed configuration of 7-8-11-13.

The S&P mode of wearing the tallet may in fact be related to the use of silk.

Historically, the S&P wore a tallet made out of silk. This material is the natural byproduct of the silk worm. Silk is discussed in pre-modern Jewish sources, but it really came to dominate the Western Sephardic world. Many of these Jews were merchants who traded around the globe. No doubt they valued this material, and therefore chose to make their tallitot out of it. This then was their way of fulfilling the mitzvah with the greatest splendour and respect -- Ze K-eli V’anvehu (Exodus 15:2).

In contrast to the common practice of folding the extra material of the tallet upon one’s shoulders, the Western Sephardim instead draped it around their arms with all four corners in front, in part because a tallet made out of silk and worn as a cape slides off the shoulders easily.

Today, it is difficult to find a silk tallet, and therefore it is increasingly absent in Western Sephardic synagogues. The most similar types of material to silk are rayon, a semi-synthetic fiber, and polyester, a synthetic fiber. While their feel may evoke the original custom of the S&P, their synthetic nature make them undesirable for performing the mitzvah of tsitsit. In the absence of silk it is preferable to use a tallet made of wool. 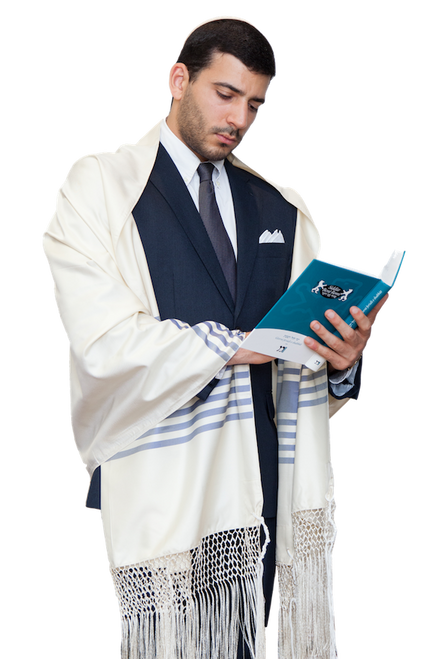