Cloth ties are sewn onto each corner of the tallit to enable you to easily rig it to the poles. These ties can be easily removed after the wedding.

The chuppah is symbolic of the cloud that covered Mount Sinai when Hashem made a covenant with the Twelve Tribes of Israel. What happened that day was a marriage ceremony in which Hashem "married" the Jewish people. Torah was the ketubah, the marital agreement, between Hashem and His bride.

In the years that followed this marital covenant, Hashem often accused His Bride of spiritual adultery because Israel was drawn after other gods. Eventually, Hashem divorced the northern ten tribes because of this (see Hosea, Chap. 1). Though He severely disciplined Judah, He spared them from divorce.

Therefore, a Jewish wedding ceremony is symbolic of the ultimate, eternal marriage of Hashem with His people Israel.

Part of the reason a tallit is often used as a covering is the fringes, the tzitzis. In Bamidbar 15 Hashem tells Israel to make tassels on the edges of their garments. These ftassels symbolize the edges of the Clouds of Glory over Mount Sinai and the way the light of Hashem would flash through. Psalm 119 equates Torah of Moses with light. This implies that the flashing beams of sunlight coming through the fringes are the light of Hashem that comes into our lives as we obey Him and keep His Torah.

Bamidbar 15:39 says that these fringes are to remind the Israelites of their marriage covenant that we call Torah. Therefore, the tallit and its fringes remind the couple that they are part of a greater, eternal covenant and that they should keep Torah from their hearts all the days of their lives. (Explanation written by Shmuel Brin) 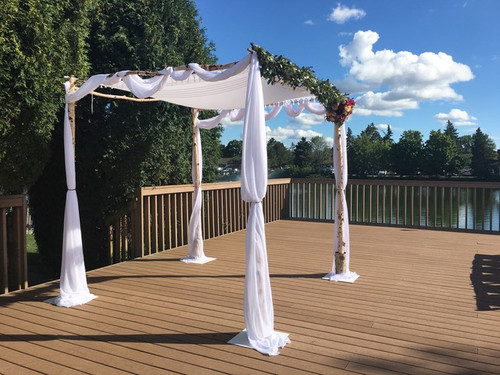